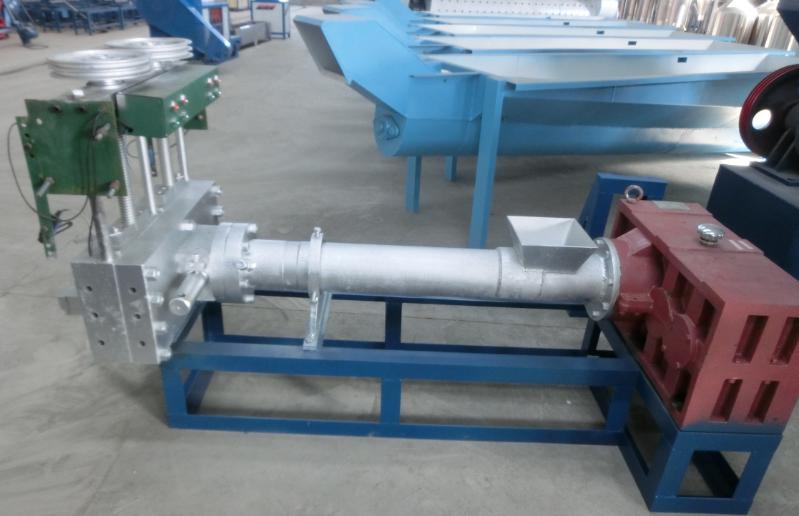 The main body of the plastic granulator is an extruder, which consists of an extrusion system, a transmission system, and a heating and cooling system.

2. Transmission system: The function of the transmission system is to drive the screw. The rotation speed of the supply screw during the extrusion process is usually composed of a motor, a reducer, and a bearing.

The auxiliary machine of the plastic granulator mainly includes: a pay-off device, a straightening device, a preheating device, a cooling device, a traction device, a metering device, a spark testing machine, and a wire take-up device. The use of the extrusion unit is different for its optional auxiliary equipment. For example, there are also cutters, blowers, printing devices, and the like.

One of the common types of plastic extrusion waste is an eccentricity, and the bending of various types of wire core is one of the important reasons for insulation eccentricity. In sheath extrusion, the scratch on the surface of the jacket is also often caused by the bending of the core. The main types of straightening devices are: drum type (divided into horizontal and vertical); pulley type (divided into single pulley and pulley group); winch type, which combines dragging, straightening, and stable tension; Pressure roller type (divided into horizontal and vertical).

Cable preheating is necessary for both insulation extrusion and jacket extrusion. For the insulating layer, especially the thin layer insulation, the existence of the pores cannot be allowed, and the core can remove the moisture and oil on the surface by preheating at a high temperature before extrusion. For sheath extrusion, its main function is to dry the core to prevent the possibility of voids in the jacket due to moisture (or moisture surrounding the cushion). Preheating also prevents the internal pressure of the plastic from being quenched during extrusion.

After the plastic extrusion layer is formed, it should be cooled and set immediately after leaving the machine head, otherwise, it will be deformed under the action of gravity. The cooling method is usually water-cooled and divided into quenching and slow cooling depending on the water temperature. Quenching is the direct cooling of cold water. Quenching is beneficial to the shaping of plastic extrusion coating.

However, for the crystalline high polymer, due to the rapid cooling, it is easy to residual internal stress in the extrusion layer, resulting in cracks during use. The plastic layer is quenched. Slow cooling is to reduce the internal stress of the product. Different temperatures of water are placed in the cooling water tank to gradually cool down the product. The extrusion of PE and PP is carried out by slow cooling, that is, through hot water, warm water, and cold water. Three sections of cooling.

The recycling process of waste plastics is:

This set of assembly line has been upgraded many times and has the characteristics of large output, low loss, low failure rate, easy operation, and low cost. The granulation line has various heating methods, which can be designed according to the customer's electricity capacity and cost. Ways, and according to the customer's materials and production, to provide customers with quality, reasonable assembly lines.